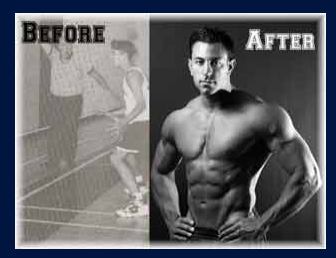 Ok, so Maximum Shred and Xtreme Deer Antler is said to be the new “muscle in a bottle”. The combo is what celebrities like Gerard Butler used to lose body fat and pack on muscle pounds. One reporter put the combot to test and here’s his result: he gained 15.7 lbs of muscle while losing 17 pounds of fat in just four weeks!

Don’t fall for these, guys. The sales pitch is thinly veiled, and there’s no real science behind the purported claims. When it comes to muscle building, it’s 80% good diet and 20% right diet. I understand that adding mass is a slow process, and sometimes you just wish there’s a short cut. Sure, a quality supplement can maximize your growth potential, but you still have to train hard. And no – you probably won’t be able to bulk 15.7 lbs of muscle in a month. According to professor Michael Rennie, School of Biomedical Sciences, University of Nottingham:

Even if you are a beginner,according to author Lyle McDonald, your potential rate of muscle gain is 2 lbs a month, at most. (see source)

Think about it: if Maximum Shred and Xtreme Deer Antler can really make you gain more than 10 lbs of muscle in a month, everyone would know it!

In short, Maximum Shread and Xtreme are far from legit. I will tell you why in seconds..

You may have come across these products on news articles of “Mens Health” or “Mens Fitness”. The articles talk about how Gerard Butler uses Maximum Shred and Xtreme Deer Antler to “lose fat fast, while gaining extreme muscle”. The thing is: these are not the real “Mens Health” or “Mens Fitness” news site, but fake sites superficially designed to deceive unsuspecting victims.

An example would be: menshealthandfitness.org, it’s almost the exact copy of maximumhealthmag.com. In the latter, Gerard Butler “uses Elevate GF and NO2 Maximus”.

Both sites have identical contents. In fact, this tactic is commonly used by online snake oil salesmen. The scammers would invite customers to sign up for free trials. However, they make it very difficult for customers to cancel subscription and obtain refund. When customer complaints start to pile up, they simply move the contents to a new site, give the product a new name, and start all over again.

Below is a list of phony sites touting the latest “muscle in a bottle”. These sites claim that Mens Health or Mens Fitness endorse their products. What’s more, the companies are using brand logos and celebrity photos unlawfully. Avoid them, don’t give them your money!

[DO NOT MISS:  See this Shocking trick guys are using to get ridiculously ripped really fast!]

http://menfitnessnews.com/en/ : Bryan Steven put Xtremegain to the test and gain 6.5 kg of muscle in 5 weeks.

http://www.mensfitnesstrend.com: Celebrities like Chris Hemworth, Gerard Butler, The Rock use 1285 Muscle and Trig X2 to lose fat and gain muscles

Comments on this entry are closed.

Note: The content on this website is intended for informational and educational purposes only. Consult a doctor for medical advice, treatment or diagnosis.